As 2013 winds to a close, we thought it would be fun to review some of the interesting phrases that were popular in Japan during the year. 流行語 (りゅうこうご – “ryuukougo”: buzzword; popular phrase) are catchphrases and words made famous by TV ads, dramas and variety programs, which you will often see being used (or spoofed!) by other ads or shows.

5) アベノミクス
“Abenomics” is what the economic and monetary policies of Shinzo Abe, during his terms as prime minister of Japan, are being hailed as.

4) 倍返し (ばいがえし)
Made popular by the TBS drama “Hanzawa Naoki”, this catch phrase has a similar meaning to the English phrase “you reap what you sow”, but with more violence. In the show, Hanzawa vows to pay back the harm done by his enemies twice as badly.

3) じぇじぇじぇ
Made popular by the drama “Amachan”, this term means “what?” in the Iwate dialect. It also serves as the base for a wordplay used in the name of the talent agency created by the lead character – “3j”. Arguably also the only 流行語 that comes with its own emoticon… （ ‘ jjj ’ ） !!

2) お・も・て・な・し
This word has become the unofficial catchphrase of the Tokyo Olymics 2020. After being used in the presentation speech by Crystal Takigawa for the Olympics, it has since been popularised internationally to describe the unique hospitality of Japan and its people.

1) 今でしょ！(いまでしょ)
This term was first used by popular high school teacher Osamu Hayashi, who always used this phrase at the end of his lectures: “いつやるか？今でしょ！”. The use of this phrase skyrocketed after it appeared in one of Toshin High School’s popular TV commercials. Literally translated, it means “When are you going to do it? Now!”, but on its own, 今でしょ has taken a meaning similar to “now’s the right/only time [to do something]”. You often hear it in commercials, in the context of “When are you going to buy this car?” “今でしょ！” 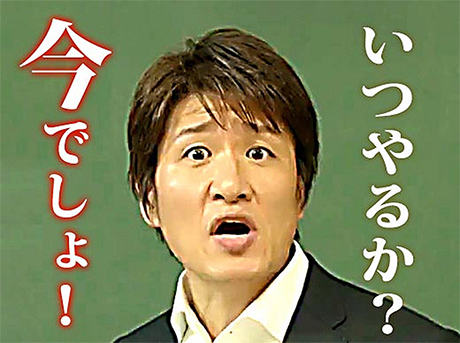