Well, the results are in for the 2010 Language Travel Magazine Star Awards, and unfortunately we didn’t win in the World Language School category this year either! But we wanted to take a moment to congratulate the other nominees:

Mandarin House, in Shanghai and Peking, has had a meteoric rise to fame, and is now the most prominent Chinese language school around. Owner Jasmine Bien is a great representative of both the school and China itself. They shared the World’s Best World Language School prize last year with Liden-Denz. Which brings us to:
Liden & Denz Russian Language School in St. Petersburg and Moscow is run by Walter Denz, a man of great leadership and well, nobility, for want of a better word. As the current president of IALC, the International Association of Language Centres, he obviously has a lot of demands on his time, but he still manages to find time to run two branches of an obviously great school.
Kai Japanese Language School in Tokyo has been a great role model for us as we grow, and also a great source of advice. The president, Hiroko Yamamoto, has been ably running her school for more than 22 years now, and it shows! They are a cornerstone of Tokyo, and the only other Japanese school in IALC.
Unfortunately we don’t know too much about the final nominee, CIAL – Centro de Linguas in Portugal. But we look forward to finding out more about them!
It’s probably worth noting that all of the nominees this year are members of IALC. We really believe that IALC membership is a sign of quality in schools, and we are very grateful to IALC too for all of the support and direction they have provided us, as well as for providing us the opportunity to meet all of the people above.

And the final winner is… Liden & Denz Russian Language School! They really deserved it. Here’s looking forward to the 2011 Star Awards! 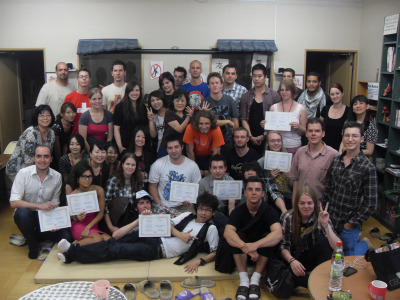