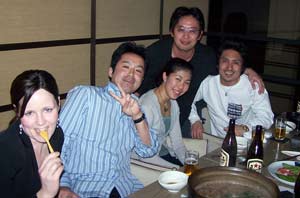 Today’s topic is the “goukon” (or gokon, or gookon), a modern-traditional Japanese dating party. “Goukon” is short for “Gouryuu Konpa”. Gouryuu means to come together, or merge. Konpa is Japanese-English (“wasei eigo”) for Companion Party.
Basically, a goukon is a slightly formalized way for young people to meet possible partners outside of their standard circle of friends. Usually, there are two “hosts”, one female and one male. Each one invites a number of friends of the same sex as them. Generally, only the two hosts know each other in advance – everybody else is meeting for the first time.
Dinner and drinks is the standard recipe, but of course that’s not all. When younger people (e.g., university students) meet, there are a variety of games to keep the conversation flowing, such as the “Oosama Game” (King game), where everybody draws secret numbered straws, then Oosama calls out two numbers and a dare… For slightly more mature participants, conversation itself, and the delicate play of getting to know the other people there, are enough. The goal, of course, is to get a phone number…

Why this topic? Well, GenkiJACS was proud to host our first Goukon a few weeks ago, with 4 foreign female students meeting 4 Japanese male doctors. We don’t know how many phone numbers were exchanged, but everyone seemed to have a good time, with dinner and drinks followed by karaoke till the early hours. More photos to come!

GenkiJACS is moving!
Thoughts from a Former Student