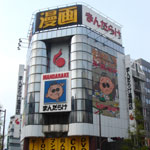 If you are someone who has bought manga in Japan before, you will undoubtedly recognize the stores Mandarake and Animate, two chains found all over Japan. They both have locations in Fukuoka- click here for directions to Mandarake and here for directions to Animate. Fukuoka`s Mandarake hosts several floors of goods including used and new doujinshi (boys and girls), general comics, games, and toys. Animate sells a number of anime/manga character goods as well as the newest published manga.

For those looking for extremely cheap used manga, I would recommend going to Book-Off, which sells all genres of books, videos, cds, and games as well.