Our Japanese language students following Japanese friends or celebrities on Twitter may have come across some of these before. Because of the character limit, it sometimes becomes necessary to abbreviate (in some cases, quite a bit!) to fit all your thoughts into one Tweet. Of course, sometimes these abbreviations just become a habit, so you use them all the time anyway (no one says “retweet” anymore… it’s just “RT”). Here are a few examples of the Japanese Tweeter Slang:

AZS (or あざーす):
ありがとうございます (“thank you”).△:
(This one requires some explanation!)
In spoken Japanese, sometimes words that end on “い” (e.g. “ない”), sometimes get pronounced, “えー” (as in, “じゃねー” instead of ”じゃない”).
Now, if you wanted to express that you think someone is cool in Japanese, you would say ○○さん、かっこいい (or, if you were to change the い-sound, カッケー).
The Japanese word for “triangle” is 三角形 (“さんかくけい” pronounced “さんかっけい” in this case).
You can see where this is going, right? さんかっけい… ○○さん、カッケー…
“I think Johhny Depp is really cool!” would be “ジョニー・デップさん、カッケー！” in Japanese, or in Twitter language, would be ジョニー・デップ△!なう / わず / うぃる :
These are all transliterations of English words – “now”, “was” and “will” – and perform more or less the same functions. Tacked on to the end of words, they function as simple to way to say when the word is taking place (and so, when you are going to do/have done something), for example:
なう → 夕食なう (ゆうしょくなう): Having dinner now / 新宿なう (しんじゅくなう): I’m in Shinjuku right now
わず → カラオケわず: I went to karaoke earlier
うぃる → ラーメンうぃる: I’m going to have ramen later
Interestingly, these are always written in hiragana (and not katakana, which is traditionally used to display foreign/loan words)…

88888888:
Represents applause, when someone congratulates you on something.
Japanese onomatopoeia for “applause” is “パチパチ” (which translates to 88 – “はちはち”), so 888888 is the sound of many hands clapping.

You’re sure to surprise your Japanese Twitter followers by using some of these in your Tweets! 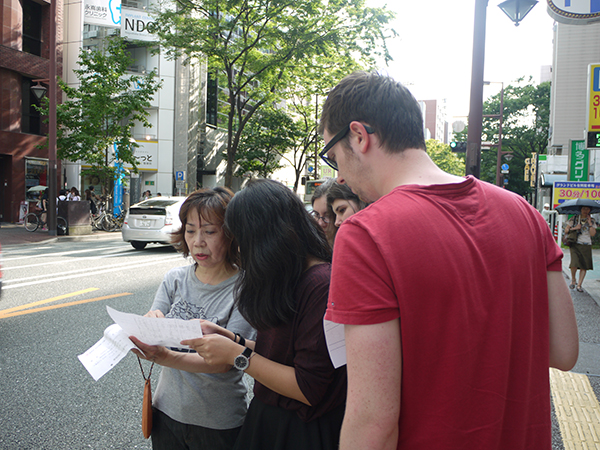