Start the New Year with a koto

On the first school day of the year for 2011, GenkiJACS students and staff were treated to a performance to start the New Year. The Japanese stringed musical instrument used in the performance is called a koto. It was introduced to Japan from China in the Nara Period and was used in court music called Gagaku. Local koto sensei Keiko played three songs: Chidori no Kyoku (千鳥の曲), Sakura(桜), and Hiyaku(飛躍).

After the performance students had a chance to try playing the koto under the guidance of Keiko sensei. 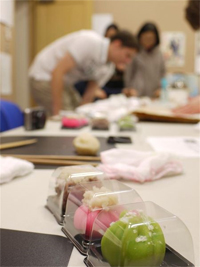